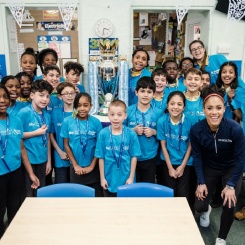 We were fortunate enough to welcome not only Alex Scott this week, but also the Premier League trophy, courtesy of Premier League Stars. Alex and Isaac from Sky Ocean Rescue led a whole-school assembly in which the children learned how to reduce their use of single use plastics, or SUPs. Please see full information about the project from the Premier League below:

The Premier League and Sky Ocean Rescue have launched ‘The Plastic Pollution Challenge’ to get children thinking creatively about how they can reduce single-use plastics at school or in their community. The Premier League and Sky are working together to use their global reach and appeal to raise awareness of the environmental issues caused by plastic pollution. This competition is the latest element of the partnership, which aims to inspire fans across the world to take positive action and reduce single-use plastics.

The ‘Plastic Pollution Challenge’, which tasks primary school pupils to make a pledge detailing how they will help reduce plastic pollution, was launched at the Princess May Primary School in Stoke Newington, London, by Sky Ocean Rescue Ambassador Alex Scott. Primary school pupils from across England and Wales can enter the competition before 22 March 2019.

The ‘Plastic Pollution Challenge’ forms part of the launch of new, free, downloadable Premier League Primary Stars PSHE teaching resources dedicated to the Sky Ocean Rescue campaign. They contain fun challenges and a quiz designed to help children understand the damage that single-use plastic is having on the environment.

There are a range of exciting prizes on offer for those taking part in the Challenge, including a visit from the Sky Ocean Rescue whale Plastics, the Premier League Trophy and some exciting special guests for the overall winner.

Ten lucky runners-up will win a chance for their class to travel to the Sky Academy Studios in London where they will have the opportunity to film their pledge, while the first 100 classes to enter the competition will win a set of reusable Sky Ocean Rescue water bottles.

Alex Scott, Sky Ocean Rescue Ambassador, said:“I’m passionate about working with young people to create a positive change around this important issue. Children are the future and will suffer most at the hands of single-use plastic and so I’m excited to see the kids taking a lead today, pledging to make changes to help save our planet.”

Fiona Ball, Sky Group Head of Inspirational Business and Sky Ocean Rescue, added:“With the recent call from the government for all schools to eliminate single-use plastic by 2022, this competition provides the children with a chance to come up with fun and imaginative ways that will help reach that goal.”

Nick Perchard, Head of Community, Premier League, said: “Premier League Primary Stars uses the inspiration of the Premier League and its clubs to engage young people in a wide range of important areas. The Sky Ocean Rescue Campaign has helped raise awareness of the critical issue of plastic pollution. By joining forces, we are encouraging children and the school community to pledge to make a change, no matter how small, to reduce the use of single-use plastic and contribute to improving the future of our schools, communities and oceans.”

Mr Reynolds, Headteacher, Princess May Primary School, added: “We are thrilled to welcome Alex Scott, and to support The Plastic Pollution Challenge.We are doing our bit in school to make our pupils aware of plastic pollution, so it’s fantastic to see the Premier League join forces with Sky Ocean Rescue to launch this important campaign and encourage young people to make a #PassOnPlastic pledge to show how they will help reduce plastic pollution.

“By empowering them to take responsibility and understand the damage that single-use plastic is having on the environment, Premier League and Sky Ocean Rescue have the opportunity to create a new generation of environmentally-minded young people.”

The trophy stands 3ft 5in (104cm) tall and 2ft (61cm) wide and weighs 4st (25.4kg) in total. Of that weight, the base into which the names of the champions are engraved comprises 2.5st (15.9kg) It was cast by Asprey London, the Crown Jewellers, with the main body made from solid sterling silver. The crown is cast from 24-carat silver gilt. The base is made from Malacite, a semi-precious stone found in Africa, with the green colour of the opaque stone representing the field of play. The design of the trophy is based on the theme of "The Three Lions of English Football". Two of the lions are above the handles on either side. When the captain of the title-winning team raises the trophy, and its gold crown, above his head at the end of the season, he becomes the third lion.